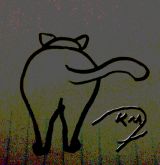 31 readers have added this author as a 'Favorite Author'.

I am an anglophone writer in Quebec province, Canada. I like to write epic fantasy with romantic elements and particularly enjoy stories of relationships between men, though this is not my only reading interest. My published stories often have glbtq content.

The Soulstone Chronicles blurb: An enigmatic deity reborn as a human being has been enslaved to work the downfall of the religious sects governing a coastal crescent of his world, but nothing can contain this perilous individual forever, not the memory-crippling blackness of death, the ominous earth goddess who seeks to recapture him, or the powerful spell that binds his soul to a stone.

The chronological order of the series is as follows: Bound in Stone, The Gryphon Taint, The Disposition of Ashes, The Redemption of Tehlm Sevet. Future sets are planned: The Sun Bane, The Apostate God, and Hell Walker.

I'm on Goodreads. Please rate my books. Sorry, Smashwords doesn't seem to allow html on this bio, so please cut and paste.

In case you are interested, I have an alter ego for a paranormal romance series that does not have a strong GLBTQ focus. You can find my other work at the following link (or look for the ocarina image under the cat butt):

Where to find K.M. Frontain online

The Soulstone Chronicles by K.M. Frontain 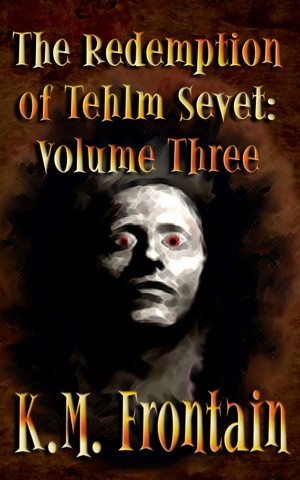 A few seconds are all it takes to destroy the misconceptions of a lifetime, yet still burden a mortal-born god with more unanswered questions. Herfod, current avatar of the Ylf Lord, regains his divine heritage, but can a legacy of secrecy, betrayal and sorrow save him and his growing family of consorts from Mahall Ryn's enmity? (The Soulstone Chronicles 12.) 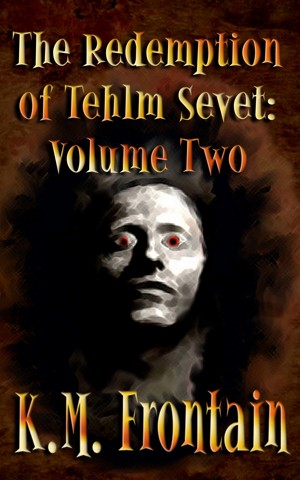 Get the ashes. Get the soulstone. Raise the Shadow Master. It sounds simple enough. However, life is never simple for the beloved teacher of the Ulmeniran gryphon royalty. Never let it be said that trouble only comes to Herfod. He'll foment his own the moment nobody's watching and pay back, with an avalanche of disasters, every annoyance perpetrated on him. (The Soulstone Chronicles 11.) 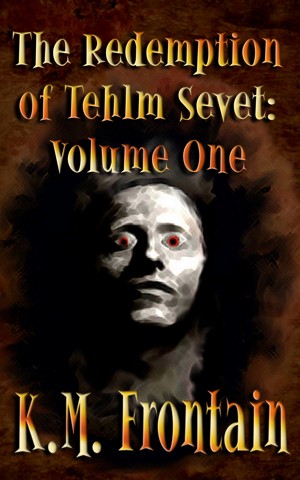 He's been dead and his soul trapped for sixty-two years, but Tehlm Sevet has never been reluctant to exploit people and circumstances. However that his beloved Kehfrey has abandoned him to a cold stone at the bottom of a subterranean lake, he will find a way to break free or bring his unwilling lover to him. (The Soulstone Chronicles 10, glbtq content.) 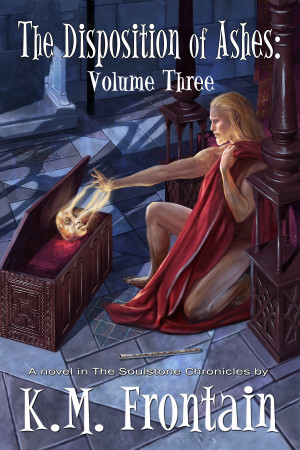 Their first winter together is at an end, and the relationship between Ufrid, Nicky and Herfod has survived, but it has been a troubled association. Herfod has kept his doubts about Ufrid’s motives hidden, but he’s certain, because the Goddess subverted Ufrid last autumn, that his lover will soon betray him. (The Soulstone Chronicles 9, glbtq content.) 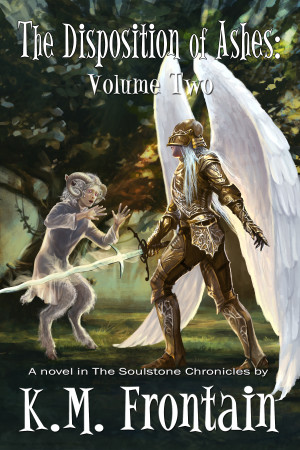 Ufrid, uncrowned king of Ulmenir, is well aware of what he takes to bed each night: the mortal avatar of a god who has defied the comprehension of the pantheon for aeons beyond count. It hasn’t been easy, and life isn’t getting easier. His brother has returned from travels afar with a god in tow, a satyr who may well know who and what Herfod is. (The Soulstone Chronicles 8, glbtq content.) 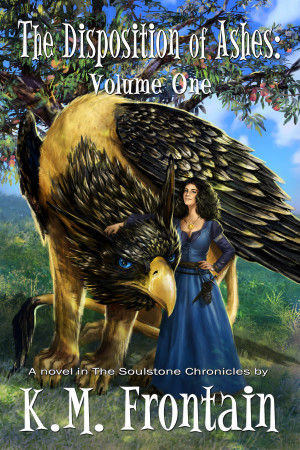 King Ufrid has been a hero, a leader, and a traitor. He’s colluded with the Shadow Master, murdered his father, and violated his brother’s wife. In retribution, he’s been enslaved to an ancient half-elf female. Even so, slavery will seem an easy burden by the time he learns the truth of former Abbot Herfod, revered living saint of the Turamen Order. (The Soulstone Chronicles 7, glbtq content.) 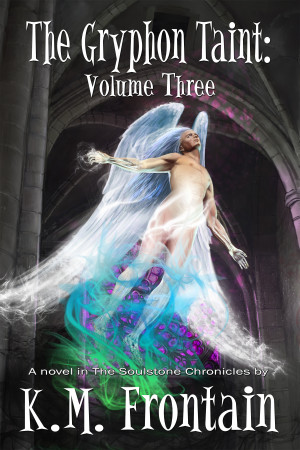 Disaster. The war is on with the Shadow Master, and Sticks, the former golem, must fight at Hanicke's side to prevail against Ugoth's brother Ufrid, who's learned the trick of becoming a gryphon. The gryphon taint is like to drive them all mad, Sticks included. (Third Edition. Content warning: Adult fiction. This novel is the sixth book in The Soulstone Chronicles.) 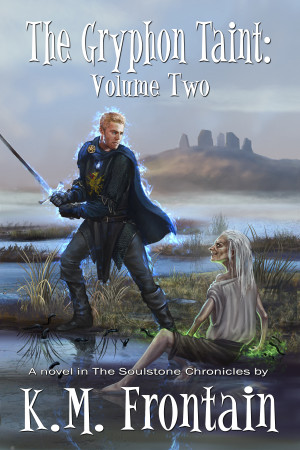 The adventures of the golem with an angel's soul continue in the capitol city of Durgven, where religion and family combine in an attempt to tear Ugoth and Hanicke apart. (Third Edition. Content warning: adult fiction. This series contains GLBTQ fiction. Fifth book in The Soulstone Chronicles epic.) 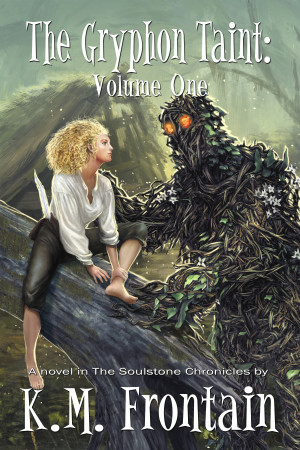 What does a monster with an angel's soul do when a prince comes along to steal his girl? He wants to kill him, of course. When the gods meddle in the lives of mortals, personal disaster is assured, and disaster is coming for golem, girl and prince. (The Soulstone Chronicles 4. This series contains glbtq content and graphic horror elements.) 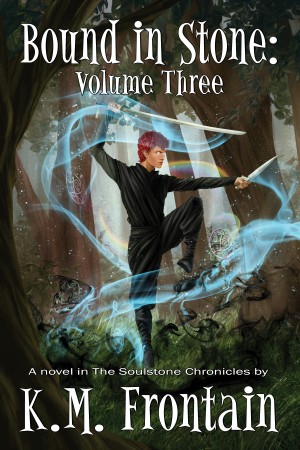 Kehfrey, infamous plaything of the Shadow Master, hides his traumatic past as Herfod, the Turamen monk. He's become the confessor and close friend of the Ulmeniran monarch, but will this save him when Tehlm Sevet decides the time is right to invade the southern realms and take his reluctant lover back by force? (The Soulstone Chronicles 3. Contains glbtq content and graphic horror elements.) 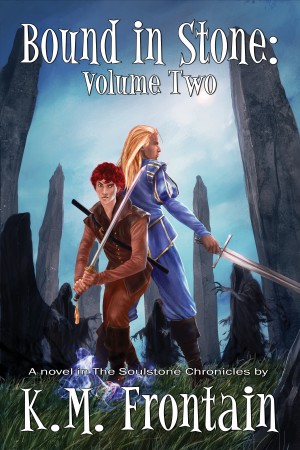 Under the thumb of the Shadow Master, Kehfrey has spent the last of his childhood learning the killing arts of a monk-assassin. Marun's plans for taking over the kingdom of Winfel and his ever-growing obsession with Kehfrey's extraordinary talents promise a very troubled future indeed. Can Kehfrey save his brother Vik, his family and his friends from Marun's dark designs? 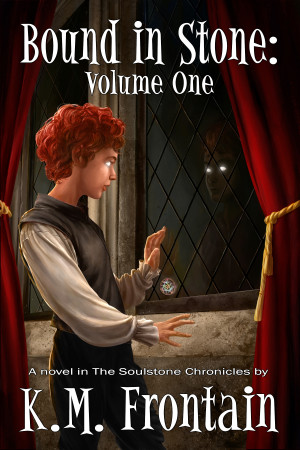 One unsanctioned robbery. One stolen item. In the city of Wistal, a sorcerer plans a holy war that will engulf kingdoms. But a theft at his manor has delayed his agenda, pitting him against the hidden rulers of Wistal, the criminal Syndicate. The sorcerer sets a trap, only to find that an extraordinary young thief is a wildcard to upset the most ambitious plans of gods and men.

You have subscribed to Smashwords Alerts new release notifications for K.M. Frontain.

You have been added to K.M. Frontain's favorite list.

You can also sign-up to receive email notifications whenever K.M. Frontain releases a new book.